Jeff Aubert – Hillstrider since 1984. Former March Madness Race Director and current Hillstrider President. I have been fortunate to check off many running goals from my bucket list – 36 marathon finishes, 12 ultra marathon finishes, Boston Qualifier 7 times (ran Boston in 1993 with my wife, Linda), ran the Chicago Marathon as part of an 18-person centipede, and several River-to-River Relays. My PRs are in my history book, as I now run less and bike more. Thus, I will run/walk 2 or 3 miles with the slower group on Tuesdays. However, the most fun I have is hosting our Tuesday Night Beach Runs. With the help of a few running buddies, I brought the concept to the Hillstriders about 25 years ago. It’s been growing ever since. I always brag to people how lucky I am to host a party with so many friends every Tuesday night in the summer. My favorite run – The S-No-W Fun Run in Lake Geneva in January – a 5 mile run, followed by a 5 hour party!! (The photo is from this year’s S-No-W Fun. It’s rarely THIS warm!)

David Ellinger - I started with the Running Club by volunteering to roast corn on the grill after the fall Hillstrider's Harvest Hustle race in 1980. I have been volunteering at March Madness Half marathon/10 km run as a race timer, results person, race director, finish line, traffic control or storage of race equipment in my basement ever since. My first marathon was in Chicago in 1984. I have been running a marathon and/or an ultra every year since that time. I ran with Fritz Kauffman(Hillstrider Scholarship namesake)in Chicago to get his first marathon under 4 hours. Marathons have been completed in Iowa, Wisconsin, Michigan, South Dakota, New York, Washington, Arizona, and Berlin, Germany. I coached middle school cross country/track and am always excited to see former runners complete their first 5 km run or marathon in their later running experiences. As a retired teacher, I now have more time to run/walk, bike, garden, visit breweries and watch the Cubs. My favorite local races include the Elgin Fox Trot, Sycamore Pumpkin Run and Milwaukee Marathon.  The Howl at the Moon 8 hour ultra has been completed 20 times. My favorite scenic race is the Sedona Half Marathon. Tuesday night beach run/walks are my favorite time to talk to fellow runners every summer about their running and the Chicago Cubs

Nancy Kinney - Hello, I am Nancy Kinney, the walker ambassador.  I did run for years, but knee problems took me down to walking.  I realized that I could still get a great workout, just with a great pace so I worked from a more leisurely walk to one that gave me a great workout.   I have completed several half marathons and a particular ultra several times with 50K as my best in 8 hours.  So my pace can be very quick, but I am also happy to walk a pace more comfortable, maybe “pushing” anyone a bit, if they desire. I have been involved in the Hillstriders since 1983, now a board member and enjoying where the club has come over the years, so new people and new ideas are what we hope for to continue!!   I especially enjoy being lead for the Fritz Kauffman Distance Running Scholarship Award, gathering committee members, preparing candidate entries and awarding money.  We gave out five $3,000 awards again this year to McHenry County High School graduates thanks to the work of our club and March Madness!!  So, come run or walk with us on Tuesday evening, enjoy a workout, some refreshments and great people.  We promise not to let anyone get lost!  My picture also gives you a hint of my other enjoyment - the Cubs! 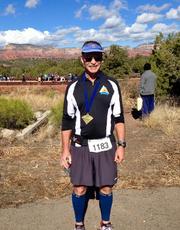 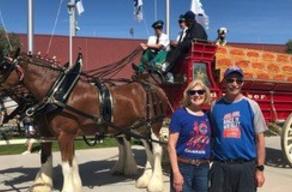 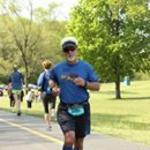 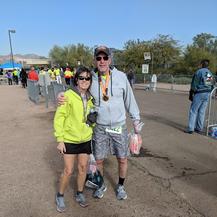 Linda Martin - I started running in 2014.  I ran my first 5K race ever, May 2015.  Since then I have kept running for my health and enjoyment.  Running has given me confidence and new friends!  I trained for my first half marathon by myself the fall of 2017, it wasn't a lot of fun to train on my own.  The winter of 2018 I found the Hillstriders Running club and haven't regretted showing up to the group run by myself ever!  It was the best thing I've ever done.  The Hillstriders welcomed me with open arms and have pushed me out of my comfort zone in the miles I put in, the pace I run and the weather I run in.   I've found myself putting in 15miles on a weekend run just to be with everyone and enjoy their company. The miles fly by so fast with friends. I've ran in a down poor of rain and negative temperatures in the winter, I used to be a runner that didn't even run in a spritzing rain and never below 20 degrees. They have changed me for the better.  I have ran a total of 4 half marathons now and will run my first full marathon this fall, 2019.  With the help of the club and family I now have the confidence in myself and believe that I can do it!  Welcome to the Hillstriders running club!  A place where you can call home and put in any amount of miles without feeling the dreaded boredom of running by yourself!  If your thinking about showing up to a group run by yourself, welcome! I'm here to help you, I've been in your shoes and want you to enjoy yourself as much as I do. It's time for me to give back to others what the club has given to me! 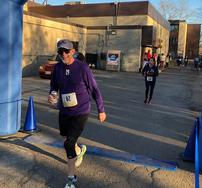 Jon Bird – I started running in 2013 and haven’t stopped since.  Within the first year of running, I ramped up from nothing to 5 group runs /week.  I was introduced to the Hillstriders the summer of 2014 and the Beach Runs quickly became my favorite group run.  The 4.3 mile flat course gives me different options.  When I’m feeling good, I like to challenge myself to run each mile at a faster pace with a sprint once I come out of the gates subdivision and have a quarter mile left.  Other times, I’ll use it as an easy social run with friends or as a mid-week long run by doing 3 loops.  Some of my favorite races are: Fox Valley Marathon (my first marathon), Run of the Dead 8 hour Elimination Run in Libertyville, John Dick Memorial 50k at Kettle Moraine. 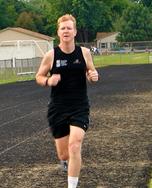 The Hillstriders Running Club is a SOCIAL running club with members of all abilities. The Ambassadors are a core group athletes who attend the majority of Hillstrider events and regularly help our newer runners get acquainted to the group.   The Running Ambassador Program is focused on the Tuesday night Beach Runs however, they are available for all events.

Brandi Henry - September 2009 was my first 5K - the gym manager told me I could do it so I trained on the gym treadmill when the kids went to bed, working hard to get up to 30 continuous running minutes. I quickly signed up for a few more 5K's and shaved 7 minutes off my first time. Then, a high school friend of mine from Michigan saw I did a 5K, & she told me I could do a half marathon, so I "came home"  to Michigan and finished in 1:57. I never trained for speed, I think any distance we accomplish no matter the speed is an awesome victory! So when I met an ultra runner on the bike path in Algonquin, he told me I could do an ultra, I showed up and did it. He invited me to my first "no medals, no wimps, no fees, no shirts" event. I ran 34.6 hilly miles on the dirt trails at Deer Grove Forest Preserve in 9’s & 10’s & to be able to take breaks and eat in between loops? Well, there began my ultra running hobby. I began running in 2009 & 2010 I did my first ultra and (I never really counted), but ran more than 50 of them. I have a lot of favorite events (ask me!), but the Summer Solstice 4 miler last year stuck out because it miraculously felt easy and I clocked a 7:34 pace & never run that fast or do shorter races anymore. I loved Mohican (Loudonville, OH) because I ran a very solid 110 miles on challenging hilly trails with challenging weather despite a breakdown when I realized I may be DQ-ed due to a wrong turn at mile 78. You will find me running to & in the trails of VA & Sterne's Woods year-round & volunteering at ultras at aid stations, or pacing people for their 100 or 100+ mile races. I believe that running heals, that long-lasting friendships are created within our running community because health and encouragement are pillars in one another’s lives. I believe that you can go longer today if someone believes in you until you are able to believe in yourself. Hillstriders is an amazing club of people of all different interests, experiences and paces. No one judges where you are. We have speedsters and walkers & a pace just for you to fit into. Over the years, I have met many great people who have become friends outside of running too. Find me and we can chat and maybe you will find the running friends or the social you need from this club. Just like running, just like life - what you put into it, you get out of it. 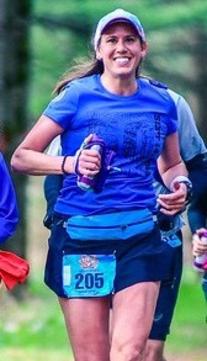 Bob Acke - I have been running since I was a kid and often (but not always) I enjoy it as much now as I did then.   I started running distance when I was in college and ran my first marathon in grad school.   That was a long time ago.   I was a pace leader for the Chicago Marathon for many years.   I have been involved with Hillstriders for years.  I have made many great friends through the club.   We enjoy activities such as cycling and cross-country skiing as well as running, and occasionally we enjoy adult beverages.

Jim Bender - Hi I'm Jim Bender. I started running about 20 year's ago to get in shape. In 2003,  My neighbor convinced me to try a marathon and now I have completed 20. I joined the Roadrunner's in 2014. The Roadrunner's continued weekly runs and soon joined forces with Hillstriders. I am actively involved with the Hillstriders board and the Race Director for 2020. I have recently became interested in triathlons and completed my first Half Iron Man last summer.  I still have a passion for group running, it definitely makes the run more enjoyable 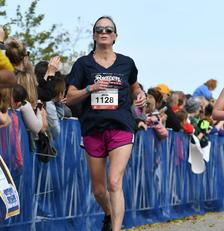 Stu Rutledge- I have been running in some way my whole life. In 2008 a friend from high school track called and suggested that we  are turning 50 this year lets run a Marathon. He got hurt and that was the end for him. I joined the Roadrunners (which is now the hillstriders training group) in 2008 and trained and ran the Chicago Marathon. I joined the Hillstriders a couple of years later and have introduced many to the Hillstriders.  I have run 20 Marathons since 2008 and some of my favorites are Milwaukee lakefront, Fox valley, Grand Rapids and Fargo South Dakota. I have done a few 50k's and numerous other distances